Headquartered in Nevada, Iowa, Burke Corporation manufactures and markets pizza toppings and other fully cooked meat products to be used as ingredients in other people’s products – restaurants, foodservice establishments, frozen manufacturers of entrees and appetizers, and consumers. Throughout more than 30 years in the topping business and 50 years in the pizza industry, Burke has served more than 2,000 customers. 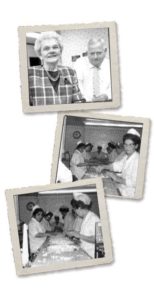 The company originated in Ames in 1957 as Pronto Foods, a frozen pizza producer. Bill Burke Sr. joined the company as operations manager in 1964 and purchased the company in 1967. The company shifted direction in 1974, when Mr. and Mrs. Burke changed the name to Burke Marketing Corporation, sold the frozen pizza line and began producing and marketing select recipes of meat pizza toppings. A focus on custom formulation and private labeling was a natural next step.

In 1984, the company outgrew its Ames production facility and moved the major production line to its current location. Since that time, the company has constantly updated with multiple expansions, implementation of new technologies and the introduction of new product lines. In 1991, after more than 20 years at the helm, Bill Burke Sr. transitioned leadership to his son, Bill Burke Jr.

In 1999, Burke expanded its capacity; improved its quick-freeze process; and created a new Technical Center to house its chemical and microbiological laboratories. In 2004, Burke’s most aggressive expansion project to date increased production capacity, improved efficiency in freezing packing and distribution, and created a fully automated clean room. Burke Corporation has experienced steady growth over the years, now employing more than 350 team members and running three shifts per day.

While Burke continues to grow to meet the needs of its customers, the company’s ongoing commitment remains: To give customers what they want, when they want it, every time.